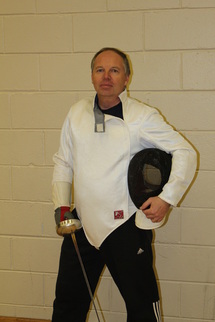 Robert Weese: First took up a sword as a student at Trent University (you'll see the theme here) as a member of the varsity fencing program. He continued to fence after graduation and belonged to a number of clubs in the Toronto area. In 1986 Bob met Matre De Arms Francois Roeder and began to study under Master Francois at Variety Village.  Bob trained with Master Francois for years and began to coach at the club. He was a volunteer coach at Variety Village in Scarborough for over 20 years working with wheelchair fencers, children & adults with special needs as well as current world class athletes.

He has received numerous awards and recognition for his contribution to fencing & coaching.  Bob continues to upgrade his coaching skills and is NCCP level II certified, High Five certified and a member of the Canadian Coaching Association and the Association of Canadian Fencing Coaches.

Ainsley Switzer: Ainsley began her fencing career as a student at the Variety Village Fencing Club in the early 90's.  She has continued to progress in the sport from a university level Gold medalist (Trent Alumni) to a member of the Canadian National Women’s Epee team. Ainsley has received more medals than we can mention including Gold in the Commonwealth Games and Silver at the Pan Am Games in Mexico. She has been coaching at the club since its inception in 2006 and works primarily with the athletes who are training for high performance. 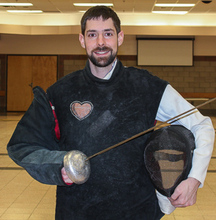 Stephan Donald: Stephan is a secondary school math and computer science teacher during the day and fencing coach in the evenings. He began coaching with our club in 2008.  Previously, he fenced at the varsity (Trent Alumni) & national level and coached at Trent University when he was a student. Stephan has been a valuable addition to AFC. Stephan currently works with the fencers in our Wednesday night learn to fence program. His focus is helping new fencers develop their individual skills so they can join the club as they become stronger in the fundamentals of the sport. 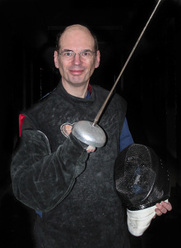 Adrian Liggins:  Adrian began fencing in the UK in the 1980's, competing for two university teams and the North West England team, as well as training as part of the North West Sports Council "Centre of Excellence".   In Canada, he has competed nationally and at international events.  He is the former head instructor at the University of Western Ontario Fencing Club and former Assistant Coach for their varsity team.  Adrian has been coaching with AFC since 2012 and works with fencers of all ages and ability level, both individually and in groups.